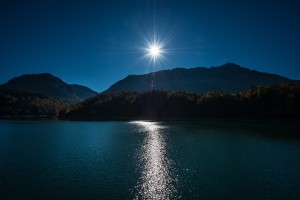 Originally written by James Horner, Barry Mann, and Cynthia Weil, for the 1986 animated feature, An American Tail, Somewhere Out There is a song that conveys the feelings of faraway loved ones and their belief that they will see each other again. In the movie, a young Russian mouse, Fievel Mousekewitz, gets separated from his family during a storm on their voyage to the United States. Arriving in the United States, Fievel searches for his family while his parents give up hope presuming that he is dead. His sister, however, has the feeling that he is still alive. Fortunately, at the end of the film, the young mouse and his family find each other and start their new life together in America.
In the same year the film came out, American singers Linda Ronstadt and James Ingram performed a pop music ballad version of the song for the soundtrack, An American Tail. This version of the song ranked number 2 on the Billboards Top 100 in 1987 and won Song of the Year and Best Song Written Specifically for a Motion Picture or Television at the 30th Grammy Awards. This tune also earned nominations for Best Original Song at the 44th Golden Globe Awards and the 59th Academy Awards.
The arrangement that I have made for this tune if for a Horn Quartet and is available on Sheet Music Plus. Check it out at this link. Somewhere Out There arranged for Horn Quartet.