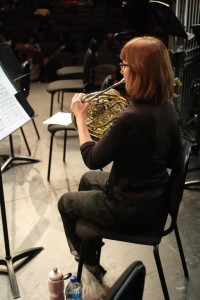 I love playing 4th Horn. Unlike the principal Horn position which us Horn players call “the hot seat,” this position is usually the least stressful of the entire section. We also get all the fun low notes too and one thing we do is to make sure our lower register does not sound as though we had beans for dinner. 😛 We are versatile at reading both treble and bass clef, and we get to transpose parts to boot. Which is very enjoyable actually because I love a musical challenge. Most of my symphony gigs involve playing the 4th Horn part, and I have played some great music. I also look forward to doing more in future performances.

Throughout my career, concerto concerts, well… are not exactly a love relationship, not a hate one either. Some concertos involve us, for example, like Rachmaninoff 2nd or 3rd Piano Concerto, while others do not involve us at all. One positive thing about having a variety in a concerto concert is that you get to play, but you can also head to the restroom during the pieces you do not play, saving us the agony of the long lines during intermission. Especially when you down a lot of water on stage as I do. 😉

Many years ago, while I was traveling for symphony gigs, I was playing in a concerto concert. Even though most of the concertos involved the works of Vivaldi, Bach, and Mozart, one number included all four horns from I do not remember who it was from (Shostakovich? Yay!). This concerto was the last piece on the program, so it gave me time to listen and enjoy the other tunes, use the bathroom, mentally go over my part and other things that make up the art of tacet. Originally set to do two movements of this composition, I was raring to go at the dress rehearsal. However, news came that the program had changed, and instead of doing two movements, we were only doing one. Well, the movement selected only comprised one note, the final note, in my part, and it was also the final note of the entire concert. A single staccato, pianissimo, low note. I think that was my shortest performance to date, but I got paid well for that note, and I think we even had a standing ovation. It is one of those moments where I look back on and laugh about it. Shoot, I was laughing about it then.