Fingal’s Cave is a sea cave located on an island called Staffa in the Hebrides archipelago located off the west coast of Scotland. Formed from hexagonally jointed basalt columns within a Paleocene lava flow, the caves size and arched roof give the true atmosphere of a natural cathedral along with the sounds produced by the waves of the ocean.

Shortly after a tour of England, Felix Mendelssohn visited the Fingal’s Cave in 1829 and was inspired by the echoes that were produced by it. With that inspiration, a famous piece was born and named after the cave, Hebrides Overture (aka, Fingal’s Cave). The opening phrase was first jotted down on a postcard and sent to his family along with a note to his sister, Fanny that said, “To make you understand how extraordinarily The Hebrides affected me, I send you the following, which came into my head there.”

Hebrides Overture was completed December 16, 1830, and was originally entitled Die einsame Insel( The Lonely Island). Later, Mendelssohn revised the work and completed it by 20 June 1832 with a new name, Die Hebriden, or The Hebrides. Fingal’s Cave was another title that used. The piece premiered on May 14, 1832, in London and dedicated to the Crown Prince of Prussia, King Frederick William IV. William IV invited Mendelssohn to England shortly after the composer’s twentieth birthday in 1829, thus helping with the conception of the work.

Intended as a complete work itself the composition is labeled an overture, Hebrides Overture. The work also accompanies the Sibelius composition program as a demo piece, used in a scene in the cartoon “Race For Your Life Charlie Brown” and the ‘chase music’ in the radio serial “Challenge of the Yukon.” 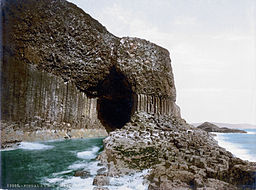