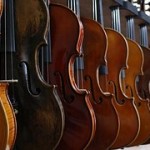 The word orchestra is originally a Greek word meaning a place for music and other performances in a theater. Before the 1600s, groups of musicians would gather and play on instruments available to them. In the 1500s, the word “consort,” referred to the group of musicians that made the music together. Composers in the Renaissance era would write parts of the music are on any instrument. The symphony orchestra, as we know it, was invented in 1607 by Renaissance/Baroque Italian composer Claudio Monteverdi.

In the time of Johann Sebastian Bach, around a century later, the orchestra evolved in instrumentation. The string section, including violins, violas, cellos, and basses, replaced viols, and the leadership of the orchestra came from a harpsichord, the first violin player, or an organ player. This keyboard player was often the composer of the music. They would use an orchestra conductor only on occasions. One of the first known uses was Italian born French composer Jean-Baptiste Lully, who worked with an orchestra for the court of Louis XIV of France. Using a long wooden staff, Lully would tap out the beats to help the orchestra play together. Unfortunately, this wooden staff played a part in the composer’s death as he hit his foot with the pole on accident resulting in gangrene.

The Classical Era (circa 1730 to 1820) saw another change in the orchestra as the string section gained more importance, and the keyboard instruments became less prominent. Composers such as Mozart, Haydn, and Beethoven, continued the trend of writing for specific instrumentations for their compositions. The ensemble became more standardized with first and second violins, violas, cellos, and double basses. The woodwind section comprises two flutes, two oboes, two clarinets, and two bassoons. The brass section comprises two to four horns and two trumpets, while the percussion section comprises two timpani. Even though the concertmaster continued to lead the orchestra from the first chair position, the conductor became more prominent in the ensemble’s leading. Instead of the long wooden staff, the conductor started using specific gestures using a rolled-up piece of white paper, a predecessor of the baton used today.

As the orchestra grew in the number of musicians in the 19th century, it was no longer practical for the concertmaster to lead the orchestra. The conductor became the prominent figure in the ensemble’s leadership standing front and center on a podium.

Today, orchestras vary in number based on the composition played. Often keeping its standard instrumentation of violins violas cellos and double basses, the ensemble varies between 40-200 members with larger orchestras, including more woodwinds, brass, and percussion instruments.