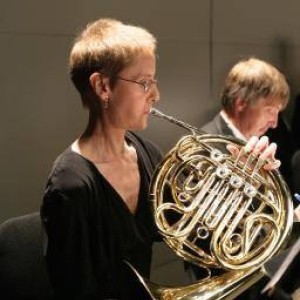 Lisa Lenke Sousa has been playing the horn since September of 1981 and had a very successful start, with many superior ratings, awards and honors; including playing under the baton of Alfred Reed in 1985 and being 1st chair solo horn for the Washington All-State Band in 1988.

She earned a Bachelors of Music Degree (received in 1994) and a Masters Degree in Music (received in 2000) from Eastern Washington University in Cheney, Washington. While at Eastern she had played for world renowned hornist, Philip Farkas for a clinic as well as being under the baton of Gunther Schuller for several other music clinics. Lisa also taught several horn master classes throughout the Northwest United States and Canada, while she was on tour with her wind ensemble in college.

After getting her Bachelors Degree in 1994, Lisa has played 4th horn in the Walla Walla Symphony in Walla Walla, Washington as well as the Mid Columbia Symphony in Richland, Washington. She also played in various other orchestras and wind ensembles. In 1994, Lisa played in the Royal Fireworks Band in Spokane, Washington as a substitute horn for their annual Royal Fireworks Concert. From 1995 to 2013, she played horn in the music ministry at Faith Bible Church in Spokane, where she played solo work as well as orchestral work in mostly the Contemporary Christian genre. She also wrote arrangements of various hymns and Christmas carols for horn, organ and piano for various services.
In 1998, Lisa decided to return to Eastern Washington University for her Masters Degree and in Spring of 2000, she even played a small jazz combo. From 2000 to 2009, Lisa played 3rd cornet in a Spokane British Brass Band and while in the brass band, she competed twice at the North American Brass Band Association’s National Competition both in the band (as a cornet player) and as an E flat tenor horn (aka alto horn) soloist in the solo and ensemble competition in 2003 in Little Rock Arkansas and in 2005 in Chicago, Illinois. In the Autumn of 2015, Lisa returned to the brass band as an E flat tenor horn player.

Lisa Lenke Sousa currently plays 4th horn with the Coeur d’ Alene Symphony Orchestra in Coeur D’Alene, Idaho; a position held since Spring of 2005. She also continues to play in the Spokane British Brass Band and various other ensembles.

Since 2015, Lisa has written original instrumental music compositions. Several of these compositions can be found on Sheet Music Plus.